I often speak to my mum about my blog. She’s my inspiration, my greatest fan and most honest critic. Today she wanted to talk about one of my posts, the one about self-harming. I felt sad that she was distressed by it, because not one part of me blames her for what happened. I tend to not talk about it with her (rare for me!) I don’t want her to feel in any way responsible. She did nothing wrong.

As a single parent, my mum worked 16 hours a day to provide for me and my sister. Not just providing basics, but to pay off debts that had been left by the ex-alcholic-abuser, and other things she wanted for us. When I was 12 she finally met her prince charming, my wonderful step-dad who’s still with us today and is as far as I’m concerned my Dad.

When I was 13, my mum’s mind decided it had had enough and she suffered a severe nervous breakdown. And it devastated me.

Through and through, I was a Mummy’s girl. At 13 I lost my soul-mate and the only person who ever stood up for me up to that point. I wasn’t book-smart like my sister, I wasn’t beautiful like my mother, and I wasn’t strong like either. At school I was bullied mercilessly, because despite being painfully shy, I fought back. But that only made my situation worst. My mum was my protector.

Having been a parent in an abusive relationship, and then going it alone, she and I were (are!) more than mother/daughter. We were partners and best friends. At 13 I couldn’t understand why the person I knew better than myself, had gone. And I thought it was my fault. What ensued was years of two people slowly breaking down until nearly ending in tragedy (but more on that later).

Slowly she did recover, but the posts have brought back painful memories for her. The daughter she couldn’t protect from the monster that had started to build inside of her little girl. But I don’t want her to feel anything but pride, because what happened was as a result of putting her children first all of our lives. Her mind just couldn’t take any more and it finally broke.

But my promise to you, Mummy, is to continue to be open about what happened to us. Because we made it, we survived! And everything that has happened has enabled me to have a great compassion and understanding for how people can suffer. Everything we went through has made us stronger and I’m so proud of who we became. 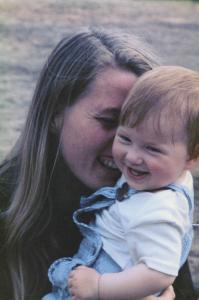 2 thoughts on “How I Nearly Lost My Mum”